I’ve paid myself. This is always a momentous day because I only do it once a year, so pay-day means I’ve survived, and – touch wood, cross fingers and toes, etc. – I've probably got another 12 months ahead of me. Which isn’t enough to finish what I’ve started, but hey-ho.

Once that and the rest of my catch-up chores were out of the way, I didn’t have much of the day left, but I did start remodelling the Dome on the Observatory…

Finished off the remodel and texturing of the observatory. It’s basically the same as the old one, but looks a lot cleaner because I’ve modelled it in blender, rather than re-topo a wobbly sculpt. I also opted to do the stars/moon detail in Substance, rather than try and bake it into the normal and it looks better. Helps that I’m using 1k textures across all the bits. 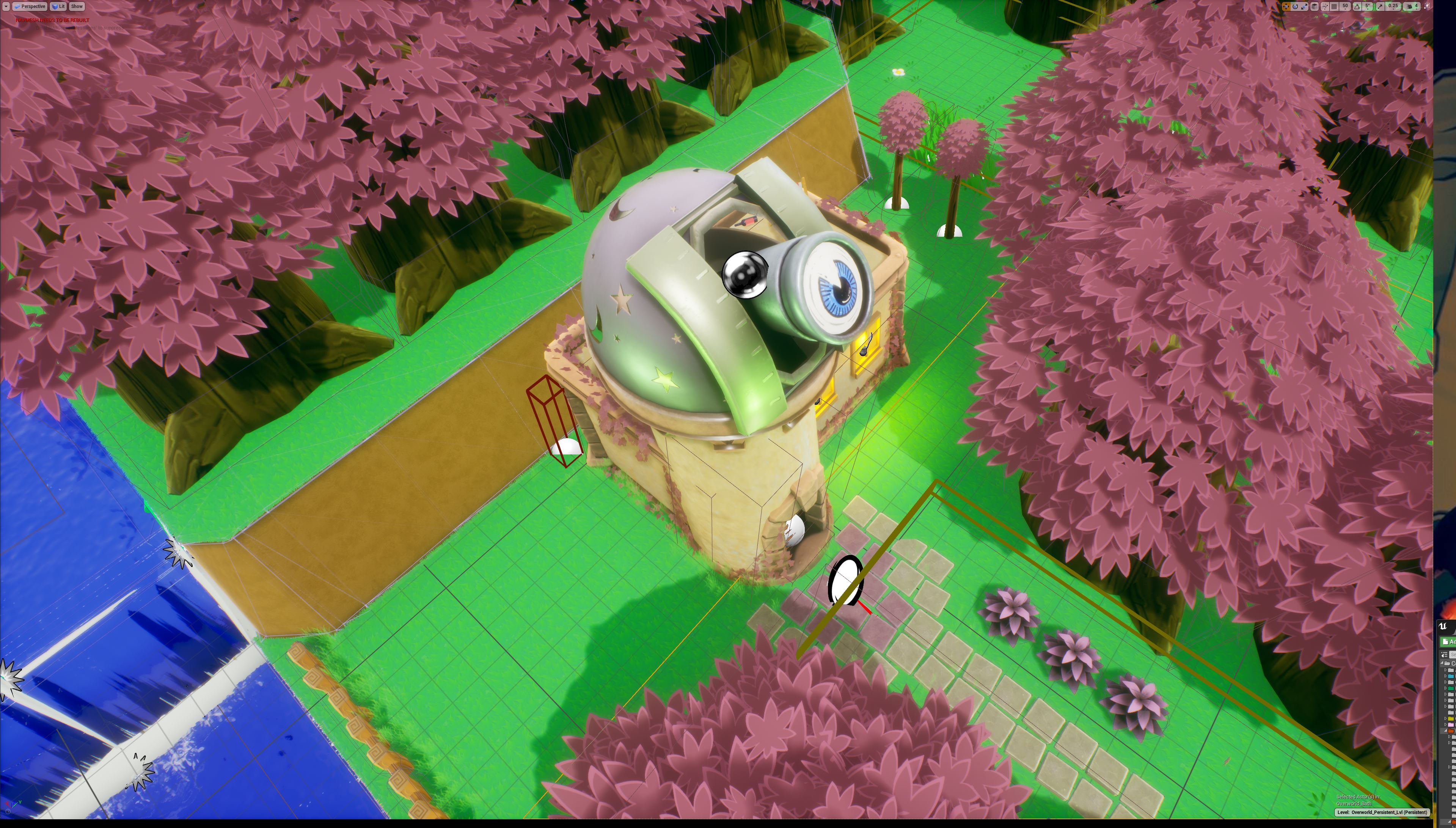 I want the eyeball in the telescope to look like the one from the Trainspotter award in Your Sinclair, but rather than just steal it I’ve drawn my own version of it. Once the DOF kicks in no one will work out what I’m basing it on, but I’ll know…

The cat brought a mouse into our bedroom at cock-knows-what-o-clock this morning, and if there’s one thing that’s guaranteed to screw-up my day it’s an early morning. Been feeling especially useless all day.

Anyway. Finished off the telescope.

I drew a bunch of eyes in various positions, and a material that’ll process sub-uvs. This time I’ve using the process I picked up from the Level Sequencing I did the other week. I setup the material using a Material Parameter Collection which can be changed in the blueprint via an object ref, instead of creating a dynamic material instance, assigning that to a mesh, and then changing its scalars directly. Basically I have, in fact, been Doing It Wrong ™ for ages… 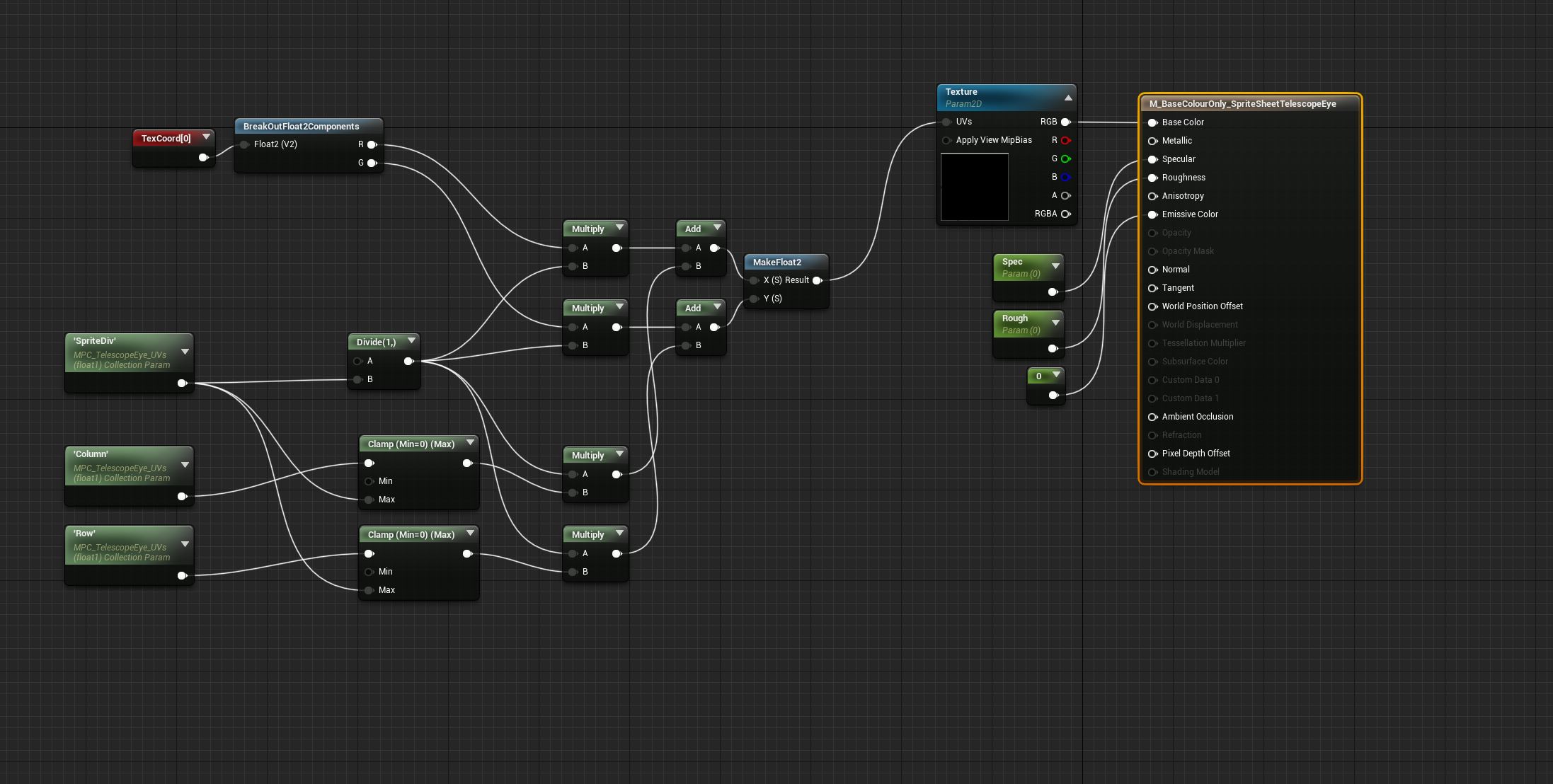 The blueprint for the observatory checks the time of day. If it’s night-time it’ll randomly pick an “eye”, and then set a timer to change the eye within a random range. During the morning it stops the timers and jumps to the position on the tpage that’s not got an eye. Dead simple, looks pretty good. 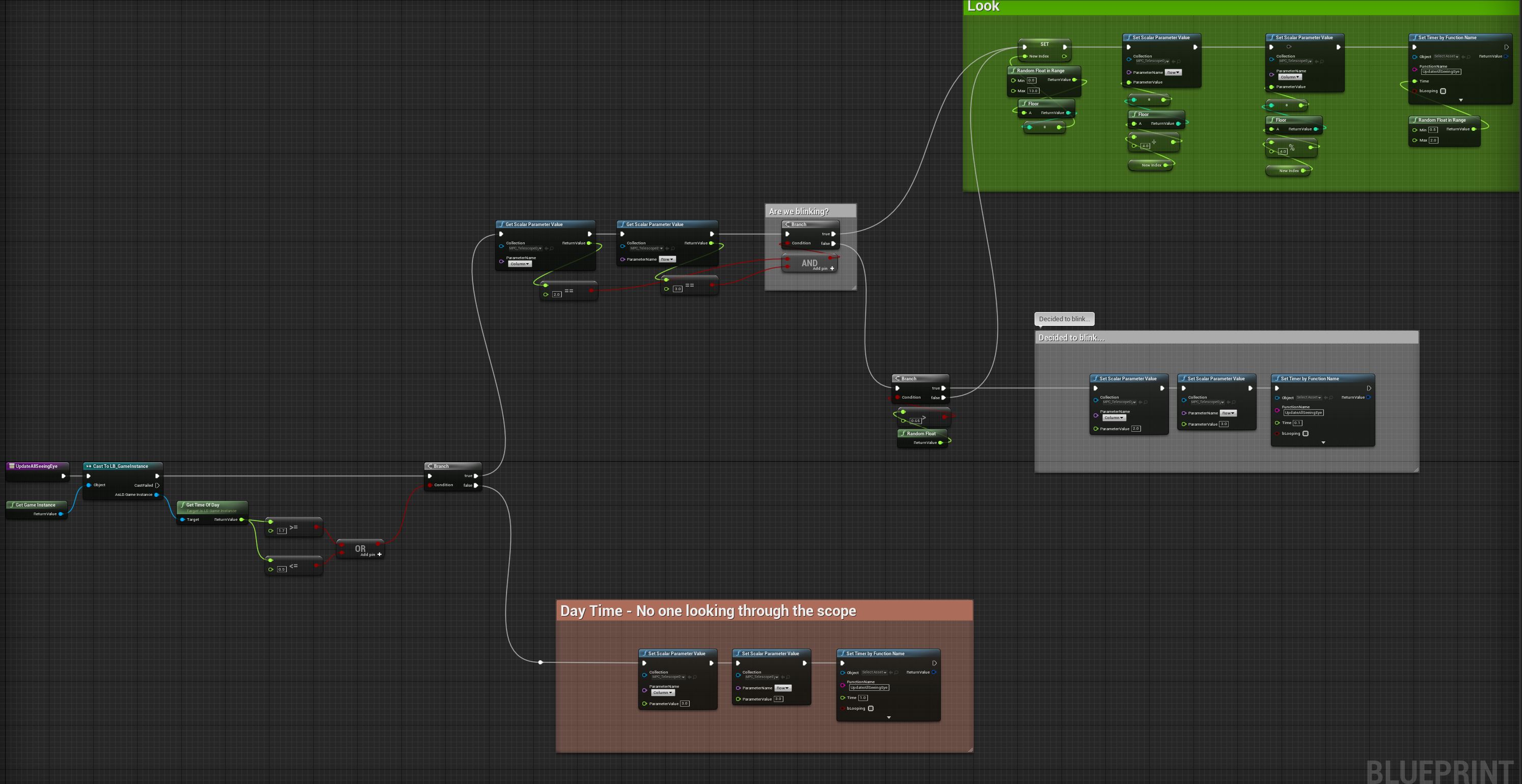 Ste said the eye looks like Frank Sidebottoms’, which I guess it does…

Found a lovely bug while playing through the build: NPCs in dungeons, that should only come alive when the player steps into a trigger area, were running about all over the place. It took me a while to figure out why, but it was down to the delegate callbacks I added to stop/start AI when the player enters/exits a ceremony. The restart callback was firing, early, on AI that were paused, waiting to be triggered, which was obviously breaking all the things.

I changed the UtilAI to require explicitly being “Started”, so that calls to Restart could be ignored. Subtle, but this allows AI to be started any way needed; via RoomEntry, TriggerArea, Object Death, etc. without any change to the globally bound delegates. Glad I caught it now and not in six months time…

Started work on a derelict church area, where you’ll meet brother Keith. It’s going to take another day (or more) to finish this off. Here’s a quick WIP: 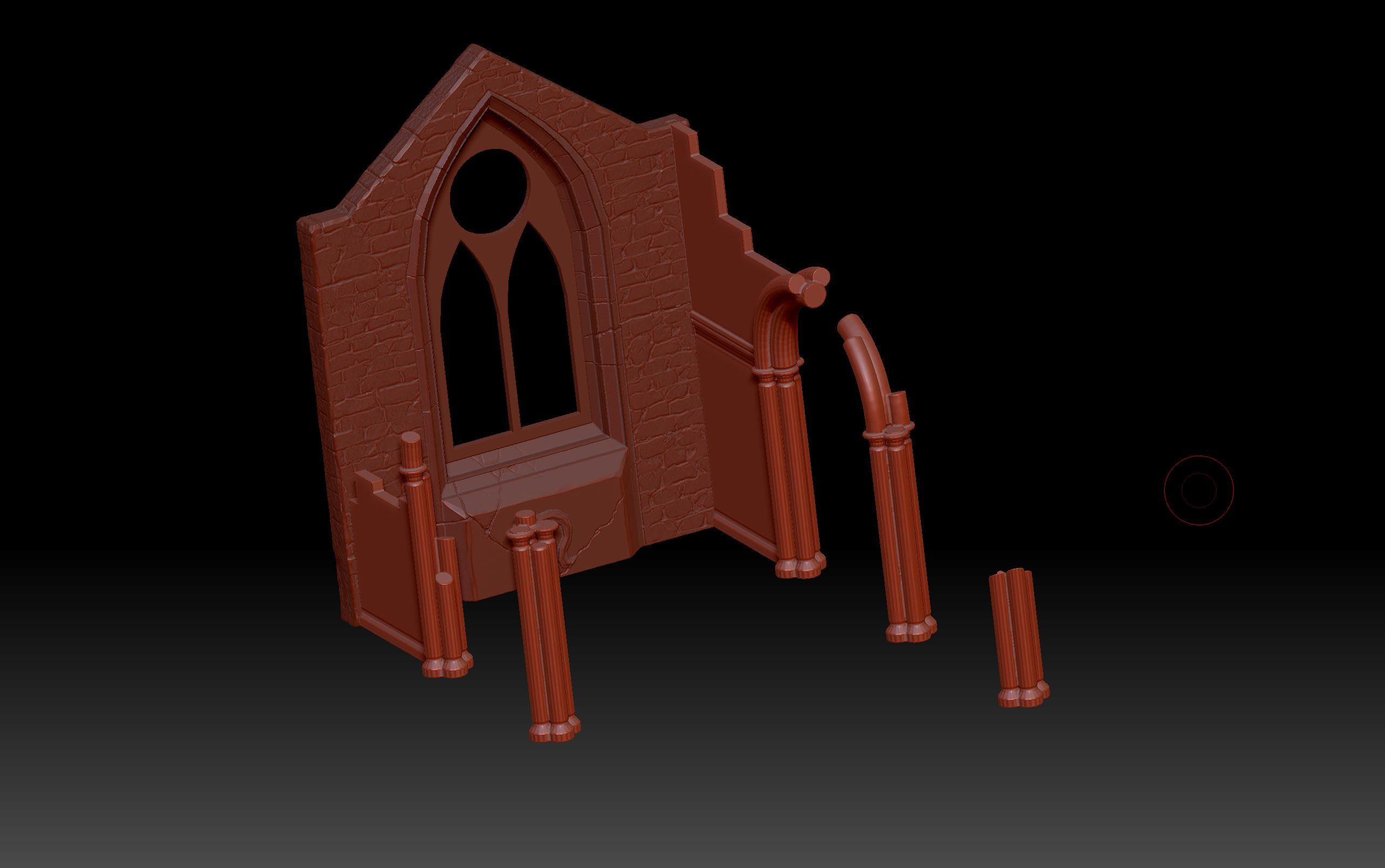